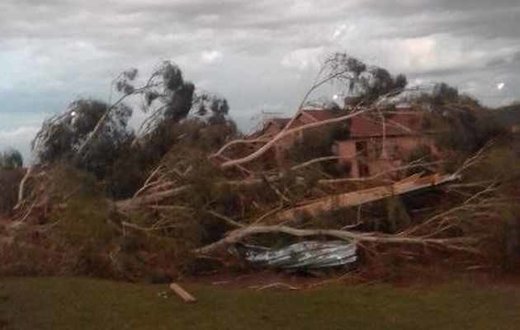 © Faizel Patel via Twitter
Certains des dommages provoqués par la tornade qui a frappé #Ennerdale le lundi 14 Novembre.
The twister that touched down in Ennerdale, south of Johannesburg, on Monday was rated as being of the type that packs winds of up to 177km/h, the SA Weather Service (SAWS) said on Tuesday. ‏SA Weather Service @SAWeatherServic tweeted: "After assessing damages at Ennerdale (GP), SAWS can confirm that the tornado at Ennerdale on 14 Nov 2016 was rated as EF1 tornado." Weather Watch SA ‏@storm_sa added some context: "The SAWS has rated yesterdays tornado that struck Ennerdale as an EF1 (estimated winds of 138-177km/h)." EF stands for the Enhanced Fujita scale, which rates the intensity of tornadoes in the United States and Canada based on the damage they cause - EF0 is the lowest, while EF5 involves wind speeds of 320km/h-plus.
‏
@SAWeatherServic tweeted on Tuesday: "Ennerdale tornado of 14 Nov: 61 houses damaged, 12 of which were insured, 47 were not insured. These huge losses are regretted." The service also announced that a tornado had touched down in Mpumalanga on Tuesday: "SAWS can confirm that from radar images that this is a tornado that occurred at around 15:15 on 15 Nov 2016".
TMG Digital
Publié par Unknown à 11/16/2016 03:28:00 AM